How American has changed

I'm starting a couple new "series" on my blog. On Tuesday, I'll be blogging about Christianity and Culture. On Thursdays, I'll be starting a Dive into History section which will give a really brief historical fact I've discovered during my research. Fun, huh? 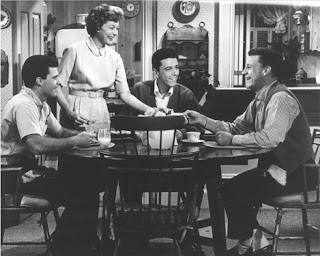 When I was a kid these things were common in America (and I'm not really that old!)

Mothers stayed home and raised their kids
Everybody I knew went to church on Sunday
Kids could play outside without fear of being kidnapped (unless you were rich)
I and my sister spent most of our free time outside playing in the neighborhood
America was the best nation on earth
America was strong and good
No one blew themselves up in order to kill other people
Gay meant you were happy
If you lived with your boyfriend, you were a loose woman
Divorce was frowned upon
There was no security at airports
Kids didn't go on shooting sprees at school
The drug of choice of most wayward teens was alcohol not ecstasy
Police were the good guys
Families could live comfortable on one income
Most people called themselves Christian
God wasn't a four letter word
Only sailors and loose women got tatoos
Married couples on TV slept in separate beds
Kids didn't talk back to their parents on TV ( or anywhere else)
Accepting charity from the government was shameful
People paid their debts
Families ate together

Can you think of any more? I'd love to hear your thoughts!