Very Strange and Telling Symbols on the Abraham Accord Temple Coin. 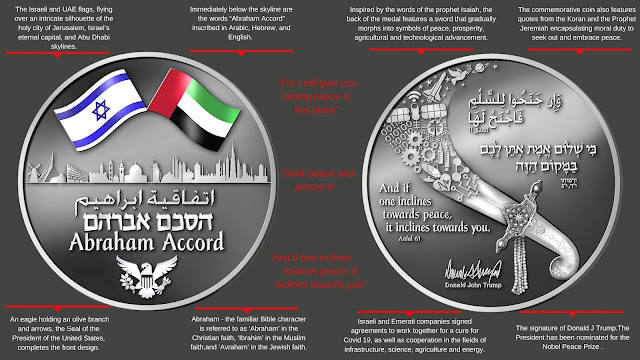 A good friend pointed this coin out to me. It's to commemorate the Abraham Accord Peace Plan just signed this past Tuesday. A VERY important and historic peace accord prophetically!

The following description comes directly from the Temple-coins website

Immediately below the skyline are the words “Abraham Accord” inscribed in Arabic, Hebrew, and English. Abraham was the father of monotheism. The familiar Bible character is referred to as ‘Abraham’ in the Christian faith, ‘Ibrahim’ in the Muslim faith, and ‘Avraham’ in the Jewish faith, and no person better symbolizes the potential for unity among all these three great faiths. An eagle holding an olive branch and arrows, the Seal of the President of the United States, completes the front design.

Inspired by the words of the prophet Isaiah, “And they shall beat their swords into ploughshares” (Isaiah 2:4), the back of the medal features a sword that gradually morphs into symbols of peace, prosperity, agricultural and technological advancement.

The commemorative coin also features quotes from the Koran - “And if one inclines towards peace, it inclines towards you” - and the Prophet Jeremiah – “For I will give you lasting peace in this place” - encapsulate the central teachings of the faiths of Abraham; Judaism, Christianity and Islam, that one has a moral duty to seek out and embrace peace.

The signature of Donald John Trump, without whose tireless efforts the “Abraham Accord” would not have been possible, rounds off the rear design.  The President has been nominated for the Nobel Peace Prize for his determination and tenacity in making this historical and religiously significant accord become a reality. 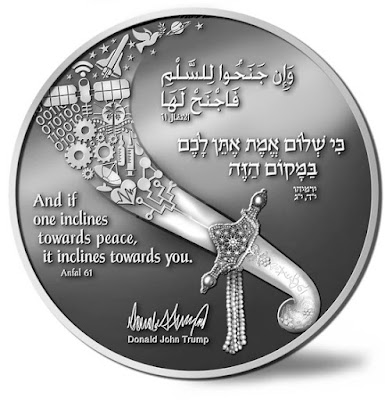 In addition to peace between former enemies, the region and indeed the world will benefit from economic prosperity.  There is a younger generation in the region that deserves better, safer and more prosperous lives.  Immediately following the normalization Israeli and Emerati companies signed agreements to work together for a cure for Covid 19, as well as cooperation in the fields of health, infrastructure, science, agriculture and energy.

Israeli Prime Minister Benjamin Netanyahu said, “Peace is a good thing and peace unites moderates, two of the most advanced economies in the world – Israel and the United Arab Emirates… We’re fighting Iran and the radicals who are trying to overthrow our order in the Middle East, subjugate people and propagate terrorism. So, this is good for peace, good for security, and good for prosperity. I think it’s good for the United States and good for Israel.”

King David, who wrote prophetically in so many of his Psalms, exhorts us in this way,
“Seek peace and pursue it” (Psalm 34:15).

In fact, the Hebrew expression in Psalm 34 implies running and chasing peace, almost hunting it down. Indeed, the Bible repeatedly conveys God’s desire that we should be peacemakers, doing our best to live at peace with everyone.

“Blessed are the peacemakers, for they shall be called sons of God.” (Matthew 5:9)

There are also scriptural reasons to be encouraged by the new links of peace forming in the south with several positive references to Sheba and Dedan (the Persian Gulf area) in relation to Israel in biblical prophecy. One example is from Isaiah 60:6, with similar hints in Psalm 72:10 and Ezekiel 27.

Let's take a deeper look at this. All this sounds well and good, all about peace and cooperation. Check out the back of the coin. What are we seeing?

At the top of the blade is a dove of peace with an olive branch. That reminds me of Noah when he sent out the dove and it finally came back to the Ark with an olive branch. Seems prophetic they would use a Noah reference since Jesus said "As in the days of Noah." when He spoke of the rapture. (Matt 24:37)

Notice the planet Saturn above the dove. Do you realize that Saturn represents Satan ?

What about the 10 stars around Saturn on the Sword? Could this be the final World Kingdom which is comprised initially of 10 kingdoms and 10 kings? (Daniel 7:24)

We also see a Satellite and digital binary code.  And a satellite dish with machinery. All representing digital advancements, robotics, AI, digital currency and tracking, which is how they will keep track of everyone during the Global government.

We also see a syringe for the Covid vaccine. But why are there 2 syringes and 2 drops? Perhaps because either there will be 2 waves of it or it will take 2 vaccines to make you immune? Or perhaps it is placed next to the machinery to indicate that it is eventually going to be the Mark of the Beast.

What's with the heartbeat that goes down to flatline? And the molecule next to it with all the circuitry beneath it? Could this be a nano particle, chip, or hydrogel that will be injected into people as part of this vaccine?

Then we have all the gems and glitter and beauty of the sword at its hilt. Almost like they are trying to distract us from the blade when it comes down on our heads.

Odd also about the Quote at the bottom of this description regarding this coin where they mention Sheba and Dedan. Who talks about Sheba and Dedan these days? They are ancient names for Saudia Arabia. But why use them? We find them in  Ezekiel 38:13 where God is describing the Gog-MaGog war and how Sheba and Dedan will protest but do nothing.

Sheba, Dedan, the merchants of Tarshish, and all their young lions will say to you, ‘Have you come to take plunder? Have you gathered your army to take booty, to carry away silver and gold, to take away livestock and goods, to take great plunder?

Peace? There are 11 references to Peace in the above description of the coin.

For when they say, “Peace and safety!” then sudden destruction comes upon them, as labor pains upon a pregnant woman. And they shall not escape. 1 thess 5:3

Are they not saying "Peace and Safety" over and over with this Abraham accord?

I also feel very uncomfortable with the combining of the Hebrew religion with Islam. Islam is the religion of the moon god and Satan. Yes, I'm all for peace between these nations but why are we combining the scriptures from the Koran and the Holy Bible on a coin and putting both religions under poor Abraham?  Abraham's covenant with God was for Israel alone and for the prosperity, peace, and land of the Jews--a land, by the way, that extends much farther than their current borders. If this peace accord forbids Israel to expand as was its plan, then I believe it goes contrary to the Word of God.

Yet. I believe this is the exact Peace plan which the Antichrist will "confirm", which means to strengthen and enhance, after Israel wins the Gog-MaGog war. If you've never heard of that war, I encourage you to read Ezekiel 38

Then he shall confirm a covenant with many for one week;
But in the middle of the week
He shall bring an end to sacrifice and offering.
And on the wing of abominations shall be one who makes desolate,
Even until the consummation, which is determined,
Is poured out on the desolate.” Daniel 9:27

Anyone else a little freaked out about this coin? Yet... this is one HUGE step closer to our leaving this place!  Look up, people, Jesus is coming!