Friday Musings: All Nations were Deceived by your Pharmakeia! 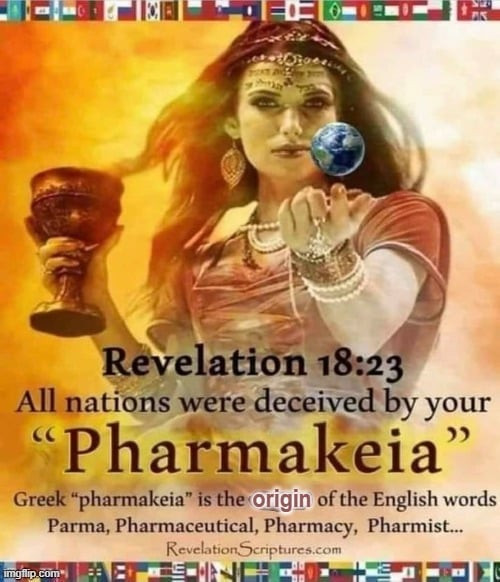 Greetings Mighty Saints of the Most High!
If we are heading toward a Great Christian Worldwide Revival, a Great Awakening, and the restoration of America, then we would expect to see some signs, some positive things in both Christendom and in local and world Governments that would lead us to believe things would get better. Are you seeing any? I believe there are definitely pockets of small revivals and people getting saved, which is super! But Worldwide? Governments backing down from their freedom-ripping methods?
However, if we are, indeed, in the last days, in the last seconds before the Rapture of the Bride and the Tribulation, what would we expect to see? I made a short list. Feel free to add to it.
Did I miss anything? Are we seeing all these things? If you've been following me here on my Friday posts, then you know that all these things are happening and increasing. I want you to know that I do not post ALL the news articles out there related to end times. There wouldn't be enough hours in the day. I do my best to post the most important ones, but my Friday lists are only a sample of what is going on in the world. I haven't and usually don't even touch on what's going on behind the scenes with the Kabbalah Free Mason Satan worshipers and how many of our leaders are involved in this. Nearly ALL of our entertainers, actors and musicians are Satan worshipers. Some, like Katy Perry, have come right out and said so. Others are more discrete. Are you a Beonce fan? She makes sacrifices to Satan. If you want to know more about this kind of stuff (only for the strong at heart), listen to this pod cast from a very knowledgeable man named Ted Broer.
Again I'm not trying to scare anyone. I'm trying to wake up the church.  There are many days that I wish I didn't know any of this. I'd probably sleep better. But the world we grew up in, the world we thought we lived in, was a fantasy. We've been lied to our entire lives as the Global Satanists have been plotting to set up their world government. The first course of action is depopulation. They don't deny this. They are doing this now, and using this pandemic to take away all our freedoms while they kill most of us.
We are on the cusp of the Tribulation, and in the coming year, I believe we will see more and more of the things I listed. Our main enemy is Deception. I encourage you to ask the Lord to give you wisdom and discernment each day and to keep you from deception, because even some of the leaders (pastors, teachers, politicians) you trust may be merely putting on a show and are just part of the Global system.

Its' been nearly 2 years since this ridiculous "pandemic" started and they have only increased their draconian measures for a virus that doesn't even have a death rate as high as the flu (unless you are high risk). They are not going to give up.

Israel turns 74 this year. Jesus said the generation who saw the birth of Israel would not all die before He returned. We are there. The most important thing right now for us to do is get close to Jesus, trust Him, Have faith not fear, and help save the lost. It's going to be a bumpy year, but Jesus is the bus driver and He knows where He is going.

Here are Two short videos from world-renown doctors that you can share with your friends who are skeptical about what is going on with the vaccine.
Dr. Zelenko exposes and risks all
Ex Pfizer Chief Scientist discusses mass murder, vaccine passports, and booster shots
If you're thinking of having your child get the V, please read this letter from Dr. Robert Malone, the inventor of the MRNA vaccine
The V and V
We are only just now starting to see vaccine deaths. Tons of them. They may try to hide it or call it something else in the hospitals, but why else are there so many people dying? Deaths reported in Life Insurance companies are up 40%!  And not everyone who dies even has life insurance.
We could see over 5 Billion people dying from the vaccine in the next decade A very important article with lots of proof
Italy, Austria, and Greece now mandating the vaccine
Scotland thinking about starting Covid Internment camps
Manila, Philippines confines all unvaxxed to their homes
Graphene nanotech in the vaccine destroys blood
The Developer of Human implantable Covid microchip says it's coming whether you like it or not
Short 2 minute video of man being arrested in Israel for not wearing a mask
The Kill Shot is arriving
New York Health Department to give life-saving monoclonal antibodies to NON-White people first
The Shadowy CIA Data firms behind the coming Digital Vaccine Passport
UAE bans unvaxxed from leaving
Death among people ages 18-64 has skyrocketed 40%
Authorities in China raiding people's homes in middle of the night to place them in quarantine camps. Think it can't happen here?
French President Macron says he will treat unvaccinated as non-citizens and cut them off from French society
NWO
Meet Kalus Schwab's class of 2021 Great Reset soldiers
Amsterdam protests erupt into violence and chaos
Top Futurist predicts 2022 will be a tormented year with water a luxury
We are entering the age where machines replace God
Feds finally admit to running secret DOJ Commandos at Trump's Jan 6th protests
The Fall of the mainstream media and the biggest lies they told in 2021
Enslavement and Genocide in America will soon be realized
Nephilim
Very interesting preliminary article on what's going on in Antarctica.
CERN set to run again after a 3 year shut down
Signs in the Sky
China's artificial sun burns 5 times hotter than the real sun
A meteor exploded over Pittsburgh on New Years Eve as powerful as 30 tons of TNT
Famine
Price increases in 2022 will be more painful than we have ever experienced
Another 4.5 Million Americans quit jobs/ replaced by robots
War:
US warships ordered to stay in the Mediterranean as Ukraine/Russian tensions grow
IDF carries out military strike against Gaza after rocket fire
Persecution
Draconian Chinese Law to shut down Christian activity online starting in March
Apostasy
Pope Francis commands all Roman Catholics to place themselves under the protection of Mary, the Mother of God
Other
Sanhedrin begins to prepare anointing oil for Messiah's arrival
Series of Large quakes strike island of Crete
For this we say to you by the word of the Lord, that we who are alive and remain until the coming of the Lord will by no means precede those who are asleep. For the Lord Himself will descend from heaven with a shout, with the voice of an archangel, and with the trumpet of God. And the dead in Christ will rise first. Then we who are alive and remain shall be caught up together with them in the clouds to meet the Lord in the air. And thus we shall always be with the Lord. Therefore comfort one another with these words.
1 Thess 4:15-18
Posted by MaryLu Tyndall at 12:30 AM