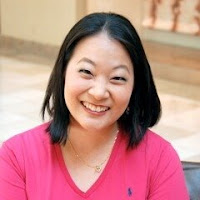 Please welcome author extraordinaire, Camy Tang! She's the author of a fabulous Chic-Lit trilogy with an Asian Flair that in all honesty, I could not put down. (And I don't even like Chic-Lit) She recently won the coveted ACFW Book of the Year for her first book, Sushi For One! And besides being a great author, she is a really nice person too.
Camy has agreed to give away a copy of her most recent releasee, Single Sashimi, book 3 in the Sushi Series. You don't need to have read the first two books to enjoy this one! I've read all 3 books in the series and loved each one, but this one was my favorite. So, sit back, enjoy Camy's interview, and post a comment on anything Camy said, and I'll enter your name in a drawing for the book. I'll post the winner next Monday, Oct 13th. And don't forget to leave your email address!

Venus Chau is determined to start her own game development company and launch the next Super Mario-sized phenomenon. However, she needs an investor to back her idea. When Drake Yu, an old nemesis, approaches Venus with a contracting opportunity at his sister’s startup, the offer to become Chief Technology Officer tempts Venus to think the unthinkable. Venus would rather throw away her PS3 than work for Drake again … except Grandma bribes Venus to do this favor for Drake’s wealthy family with a coveted introduction to the most respected investor in the game industry. It’s also a short job—only a few months—so Venus won’t have to stand Drake’s presence for very long.But one wild youth group, a two-faced assistant, and Grandma’s determined match-making threaten to make them both fail—or go insane. With the encouragement of her three cousins, Lex, Trish, and Jennifer, Venus discovers that even a wounded heart can undergo a beautiful transformation …

Since Camy lives only a mile from me, I recently had a chance to interview her.
1. What is the hardest thing about being an author? And what keeps you writing every day?

For me, the hardest thing is managing my time with all the other things I have to do—my critiquing service, online marketing in various forms, blogging. I do my best to manage my time, but sometimes there are other things that need to be done, so the writing gets squeezed out for the day.

I’m trying to get better about that, however. I try to set aside some time each day to write NO MATTER WHAT, and also an hour to read—because if I’m not reading what’s already being published, I can’t be sure that what I’m writing is fresh and appealing.

2. I’ve read all three of Camy’s books and she is the queen of characters. All of her characters are real, interesting, and identifiable people who will strike you in the emotional gut. What is your secret to creating such intense, real characters? Tell us briefly about the main characters in Single Sashimi? What makes the heroine, Venus, tick? What sets her apart from other heroines? What about Drake?

I use character archetypes as the baseline for my characters. I typically use the book 45 MASTER CHARACTERS by Victoria Lynn Schmidt and choose an archetype for the character first. Venus is the Father’s Daughter archetype, based on the goddess Athena.

Then I add some sort of twist to the character to make them more interesting than just the basic archetype.
For the Athena archetype, she values approval by the men she works with.
For Venus, I turned that on its head by making her despise the men she works with because of the change in how they viewed her when she suddenly lost so much weight.

This is how she is at the start of the story, so while she’s still the Athena archetype, she’s dealing with what seems like the betrayal of all the men in the world. This makes her more than just the archetype—she starts off the story already struggling with the loss of something she’s always held close.

Using archetypes is helpful for me because it separates, in my own mind, how I view each character. Lex is the Artemis archetype, Trish is the Persephone archetype, and Jenn is the Demeter archetype. They each seem very different to me in my own head, so when I write them, hopefully I convey their differences to the reader, too.

3. Is there a theme running through the story? What do you hope readers will take away besides a fun, entertaining read?

My hope is that readers will come away with a stronger understanding of how God is always in control, and that we just need to let go of our own sense of what we’d like to do or have happen and let Him do His thing.

4. You run a critique service as well as a “book doctor” service. What are five of the most common mistakes you see in the manuscripts that cross your desk?

I actually did ten of the most common mistakes, and I blogged about it here:
http://storysensei.blogspot.com/2008/08/top-ten-mistakes-i-see-in-fiction.html

Some things I mentioned might surprise an intermediate writer. The one thing I want to emphasize is number 2, where I talk about clichéd characters. I see too many stories where the characters are not intriguing or original.

The thing is, a writer will not know if their character is truly original unless he/she READS EXTENSIVELY. In the article “Surviving Your Career” in the October 2007 issue of the Romance Writer’s Report, best-selling author Connie Brockway said: “In order to keep the word well filled, for every word you write you ought to read two.”

My next release is a romantic suspense called Deadly Intent that’ll be out around August next year. It’s part of Steeple Hill’s Love Inspired Suspense line, and I’m totally thrilled about it!

Here’s a back cover blurb I came up with, but this might not be what’s on the actual back cover:

THERE WAS A DEAD BODY IN HER MASSAGE ROOM

And massage therapist Naomi Grant is suspected of murder. She’s frustrated and helpless as a web of lies closes in around her, framing her. She doesn’t have time to worry about her shaky faith or think about her growing attraction to the victim’s ex-husband, Dr. Devon Knightley.

Orthopedic surgeon Devon had only needed to claim his mother’s necklace back from his ex-wife, but suddenly he’s embroiled in a murder investigation and someone is trying to kill him. He wants to somehow protect Naomi from the trap being set around her, but can he keep them both safe against a villain with deadly intent?


Thanks for having me here, MaryLu!
Camy

Camy Tang writes romance with a kick of wasabi. She used to be a biologist, but now she is a staff worker for her church youth group and leads a worship team for Sunday service. She also runs the Story Sensei fiction critique service. On her blog, she gives away Christian novels every Monday and Thursday, and she ponders frivolous things like dumb dogs (namely, hers), coffee-geek husbands (no resemblance to her own...), the writing journey, Asiana, and anything else that comes to mind. Visit her website at http://www.camytang.com/ for a huge website contest going on right now, giving away ten boxes of books and 30 copies of her latest release, SINGLE SASHIMI.
Posted by MaryLu Tyndall at 3:38 PM